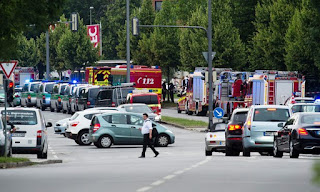 German police have evacuated a shopping centre in Munich after an armed man went on a shooting spree in the building, police have said.
Several people were injured and there were unconfirmed reports of deaths, local media said.
An emergency call was received at 6pm local time after the man opened fire in a pharmacy at the Olympia shopping centre in the Moosach district of the Bavarian city.
4m ago13:31 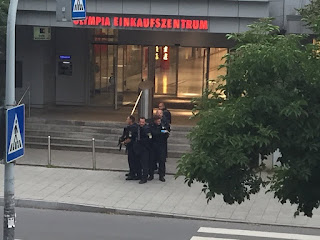 Süddeutsche Zeitung is reporting that at least one person has been killed and 10 injured. Still no confirmation from police.
According to Germany’s DPA news agency, police “expect multiple dead”.

Several people have been shot dead in a shooting at a shopping centre in the German city of Munich, police say.
A big operation is under way. Police are telling people to stay at home and avoid the streets.
Several people have also been injured at the shopping centre in the north-western Moosach district.
Reports speak of one attacker. Some shopworkers are reportedly unable to leave the building.
There is no information about a possible motive for the attack.
The security forces have been on alert after a migrant stabbed five people on a train in Bavaria on Monday.
The authorities had warned of the danger of further attacks.


A man working at a local petrol station told the BBC: "We see just ambulances and it's like firemen and police but all this area is evacuated, all the streets.
"Now [there] are no cars just on the side of the streets. All of the streets are blocked. I see that the people are scared. Everybody are running around."
Public transport is said to have been suspended as the security operation continues.


Awwww! My head! Boy! What a night it was!
Ahhh, başım!Vay be! Ne geceydi ama.
No animal ever invented anything as bad as drunkenness - or so good as drink İnsan dışında hiçbir yaratık sarhoşluk kadar berbat birşey yaratmamıştır -- nede içki kadar güzel...
Always remember that I have taken more out of alcohol than alcohol has taken out of me. Unutmayalım ki b…
Yorum Gönder
Devamı